FROM JUNE THE 24TH TILL JULY THE 4TH WE ARE ON VACATION!!! ALL ORDERS WILL BE PROCESSED FROM JULY, THE 6TH

Were Superfans of Stiff Records because:
From 1976 to 1986, this record label founded by Dave Robinson and Jake Riviera, had been the cover letter for rtsist as Nick Lowe, Elvis Costello or Ian Dury.
It was the very first demonstration that an indie label was able to have more than one or two breakthrough and to move in the very same waters than the powerful musical industries..
The company piublished the very first british punk single by october 1976: New Rose by the Damned, one month before the Pistols with  Anarchy in the UK. The very first Motorhead record, Leaving Here (a cover version vof a 1963 soul song) was to be edited with Stiff records, but in this case it couldn’t be published in the UK.
With Stiff Records, Madness exploded with the massive hit One Step Beyond and then took a more pop and delicate path.
We love the provocative perspective of the company’s marketing and advertizing. It brings the self-titling as “the world’s most flexible label” and gave us slogans as: “if it ain’t Stiff, it ain’t woth a f**k”, “We came. We saw. We left” or “When You Kill Time, You Murder Success.”
The height of the ubiquitous sense of humour of Stiff Records maybe was the LP The Wit & Wisdom of Ronald Reagan : dos sides of pure silence. 30 000 copies sold!!! 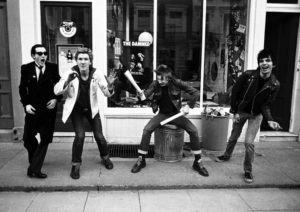 The Damned outside Stiff Records quarters (1976) 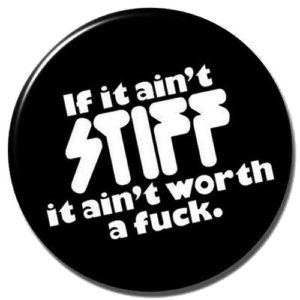 Promo badge with one of the most famous slogan 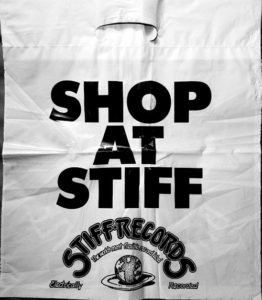 Shopping bag, the ancesor of the now omnipresent “Shop Online” 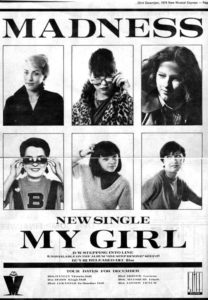 “My Girl” single by Madness advert picturing… their girls.

Till the next edition of Superfans of…!